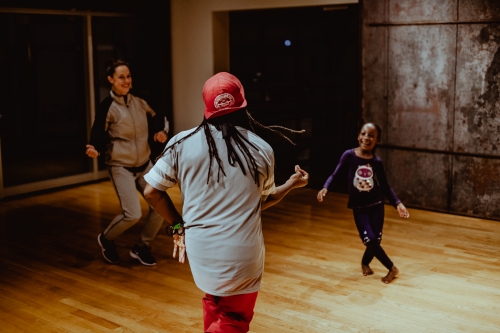 I wanted to make a real intervention in the lives of other artists. My spaces, almost all of them were at one time abandoned. On the block and in the neighborhood, many who could leave, did. Impact to me is about action. It is hard to understand that in an area where there is abject poverty, simply choosing to stay becomes a radical act, even if you didn’t intend for it to be radical. It is easy when there is a tipping point in a place to consider change as negative. It is also reasonable to have fear that the poorest within these neighborhoods might find themselves displaced. But the truth of the projejct is that so much more is needed from us all, policy makers, writers, activists, lobbyists, businessmen and women, preachers and teachers and thinkers and artists. Most people would rather do nothing out of the reasonable fear of exposure. So no one does anything. No one says anything.

Dorchester Art and Housing Collaborative (DAHC) is a project done in partnership with Brinshore Developers, architects Landon, Bone, Baker; Rebuild Foundation and the Chicago housing Authority, Dorchester Art and Housing. It is the clearest and most intentional intervention around the issue of artist housing and artist’s needs I have done. Consisting of 32 units made for those who receive affordable and low-income housing support with an amazing space for theater and dance, the mission is to first share culture with the folk residing in those 32 units. The work is quiet and sincere and beautiful. I am so grateful for the generations of teams that have helped me in these efforts.

As a life practitioner, the possible interventions and engagements are endless. Rather than only intervening with these subjective, museum-based projects, I had to try to do something that had weight in concrete space; Black space. While it remains one of the least discussed projects of my practice, DAHC is one of the most relevant and fulfilling for me.